On a recent afternoon, two dozen journalists gathered in front of a large, beige-colored hall in the suburb of Poissy, northwest of Paris, in the department of Yvelines. With French and international cameras capturing the scene, a group of politicians and doctors cut a ribbon in blue, white and red, the colors of the French flag.

“We are the central government’s partners — not its adversaries,” said Karl Olive, mayor of Poissy, into a microphone. Then, the group walked into the building, with the trail of journalists following close behind.

The hall is the country’s first out of many COVID-19 vaccination centers run by a municipality. These are supposed to help France accelerate its vaccination campaign. But getting enough people immunized might not be that easy. 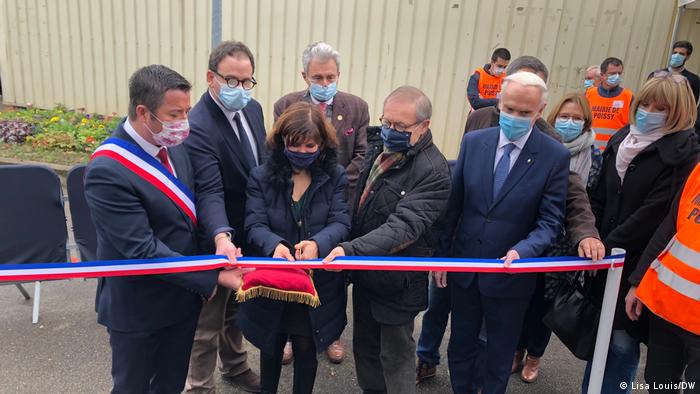 ‘This unprecedented moment in history’

“I want to go to a restaurant again, go partying and give my kids a cuddle without having to worry,” Christian Lehmann, a Poissy-based GP, told journalists while being the first person to get a jab in the new center. Later on, he put on a blue medical blouse and started vaccinating others.

Mayor Olive was watching the scene, with a smile on his face. “Tell us if it’s stinging,” he shouted from behind the cameras. The 51-year-old says he’s glad that local governments are now playing a bigger part in getting people immunized. “It’s important to be part of this unprecedented moment in history. I, as mayor of Poissy with its 40,000 inhabitants, want to show that we can really help in the fight against this global pandemic,” he told DW. Olive added that there would soon be 10 such vaccination centers in Yvelines and 300 across the country. 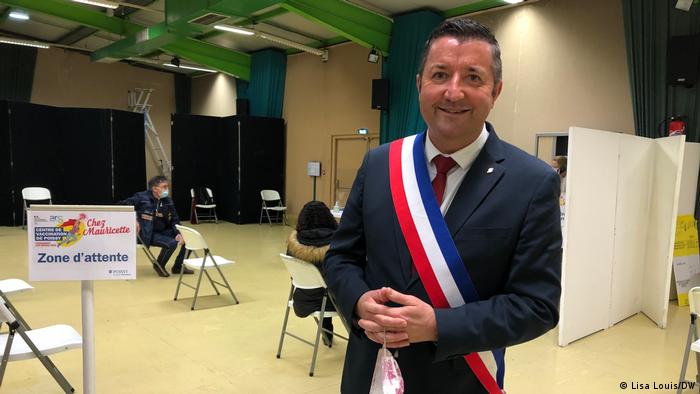 “This will allow us to inoculate up to 500 people per day here and very quickly the entire French population across the country,” he said.

‘The laughing stock of the world’

Speeding up France’s vaccination campaign seems crucial. The country has so far only inoculated tens of thousands of people — compared to hundreds of thousand in some other European countries. 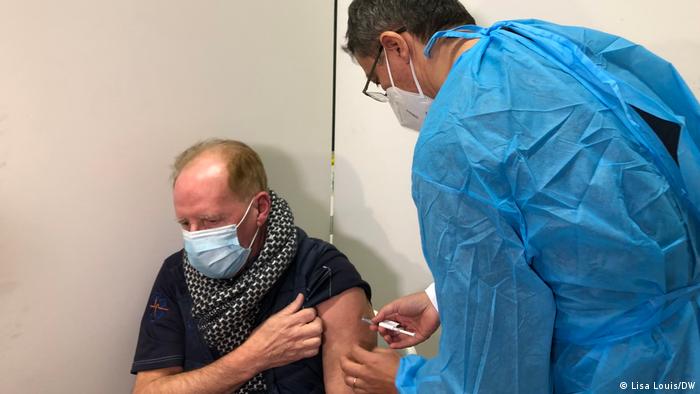 After receiving his jab, Christian Lehmann is now doing the favor for others

Michael Rochoy, a GP in the northern town of Outreau, thinks that’s down to logistical and administrative reasons. He has signed an op-ed, together with about 30 other physicians, calling on the government to declare the vaccination campaign a “Grand National Cause.” “We have become the laughing stock of the world,” he told DW. “How is it possible that things are going that slowly in a country that has such a formidable nationwide health system?”

He thinks the government has chosen the wrong people to run the campaign. “The physician Alain Fischer has been appointed the government’s chief vaccination strategist. But he says of himself that he has no clue of logistics — and yet, this is mainly a logistical job,” Rochoy fumed.

“What’s more, we have to get extra consent from each patient and are supposed to enter information into a new online platform that only started working days after the kick-off of the vaccination campaign — all this has been slowing things down even further,” he added. 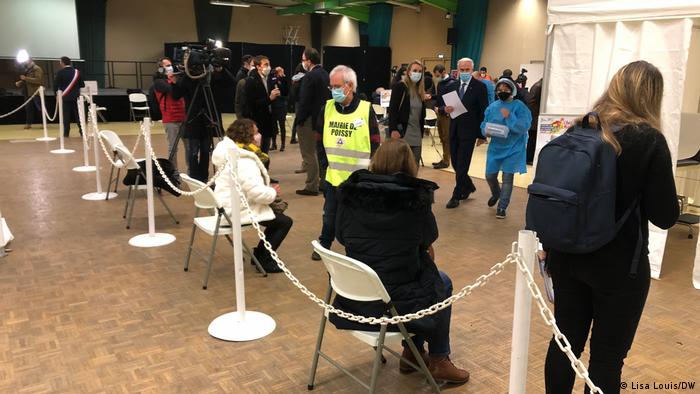 ‘There is no problem’

But the government denies France is lagging behind. “There is no problem,” Jacques Marilossian, lawmaker for government party LREM in the department of Hauts-de-Seine near Paris, told DW. Then, he compared the situation to a football game: “You wouldn’t judge its result after five or six seconds although the game goes on for 90 minutes, would you?”

Marilossian explained that France had been struggling to get hold of ultra-cold freezers. These are required to store the vaccine by Pfizer and BioNTech, the only one so far available, which needs to be kept at minus 79 degrees Celsius (minus 100.2 degrees Fahrenheit).

But the lawmaker promised the vaccination campaign would soon accelerate.

“We are bringing forward the vaccination of certain groups, such as medical personnel. And we’ll soon receive vaccines that won’t need to be stored at these extremely low temperatures. We prefer to take our time initially and proceed with caution to eventually reach the same result as othercountries,” he said. France’s highest health authority Friday authorized a second COVID-19 vaccine by Moderna that can be stored at minus 20 degrees.

Logistics not the only obstacle

But even if the country catches up with other European countries, there is another problem. France is the world’s most vaccine-skeptical country, according to a 2018 poll by Gallup’s Wellcome Trust in 144 countries. Only four out of 10 people are planning to get a COVID-19 jab.

One reason for that is that only about 40% of the French trust their government to handle this crisis, according to recent polls. Mayor Olive wants to do his bit to boost that figure. He and 300 other mayors have written an open letter pledging that mayors should get publicly vaccinated. “I think such symbolic actions are important — they can help convince people that getting immunized is a good idea,” he pleaded.

However, the very slow start to the vaccination campaign is unlikely to help restore people’s confidence.

Source: COVID-19 vaccination: France aims to make up for lost time | Europe| News and current affairs from around the continent | DW | 08.01.2021